The most awaited 25th June has arrived! With this, we greet our beloved Jung JiHoon: "Happy Birthday!". Whether 32 (Western age) or 33 (Korean age), Rain proves that age is but a number. Our hero grows all the more handsome with time. (^_^)


We extend our heartfelt birthday messages to Rain. Special thanks to Lili and Jess of Rainthetreasure for these beautiful videos.

Posted by Angel Mariel at 7:10 AM No comments:

Now, who knew Friday the 13th could be so beautiful! Seeing our man basking into the sun which seemed to make his flawless skin glow. Oh! He is brighter than the day!

Photo credits: various Korean media, Weibo users, as tagged and as watermarked.
Yeah, I know that most of our brains still can't get over our gorgeously sharped-dressed man gracing the red carpet of the 17th Shanghai International Film Festival. But I think the day before that was just as fabulous. Agree? (^_^)

First, we saw him donning a max-stylish boyish look at Incheon International Airport for his departure trip to China.

We all know that Rain has always been fashionable in his airport photos. But what got me into the June 13 photos is the eyeglasses. The humongous, polygon-shaped, black spectacles which seemed to frame his face and highlight it. It didn't hide his lovely eyes unlike what ordinary glasses did.

What completed the look is his hair! Oh! And the watch and beaded bracelet, too! And... And those black earphones! And the elegant bag with a subtle yet intricate futuristic design is to die for! Eh? I can't choose just one striking accessory. Hmmm... maybe the white Nike Air Jordan 11 Retro Low "Concord" sneakers, which definitely stands out from the all black outit. Hehehe~ Basically, all of the stylish elements are excellently put together! 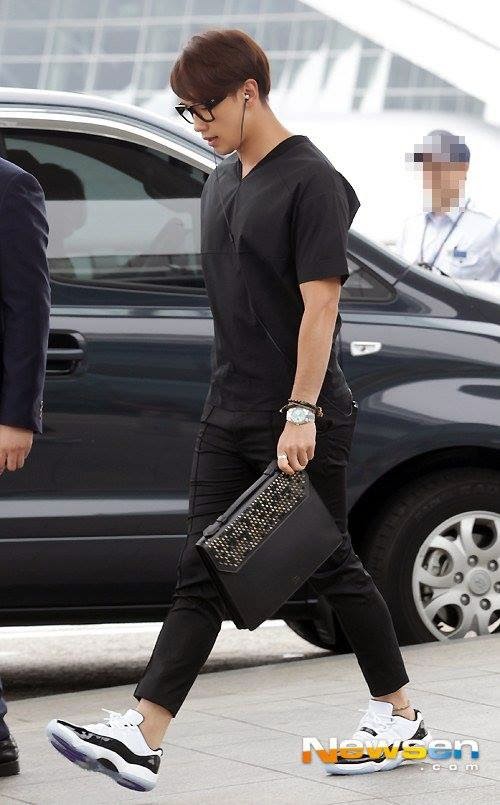 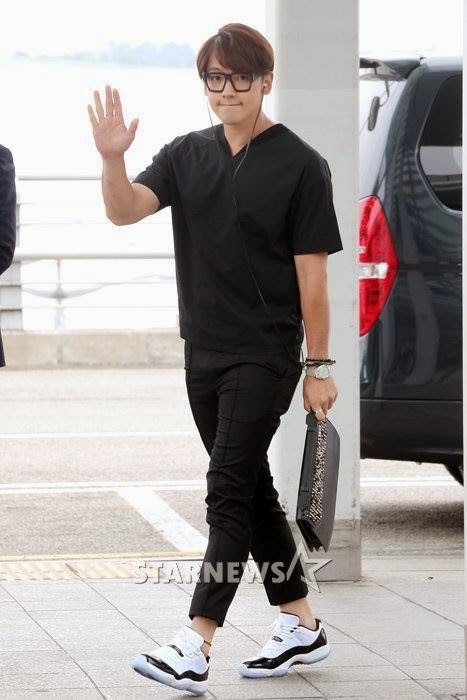 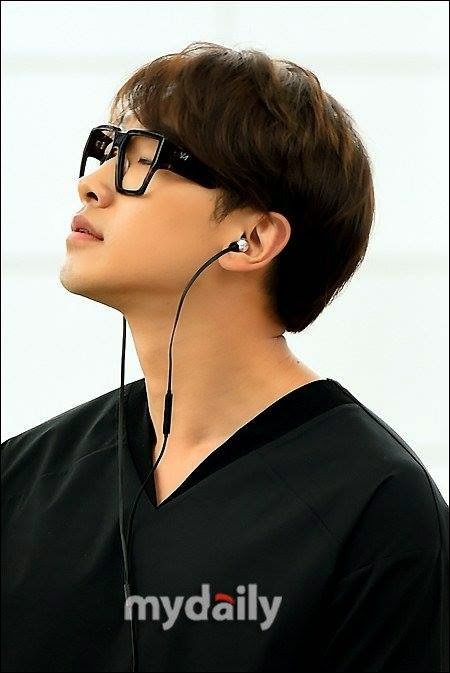 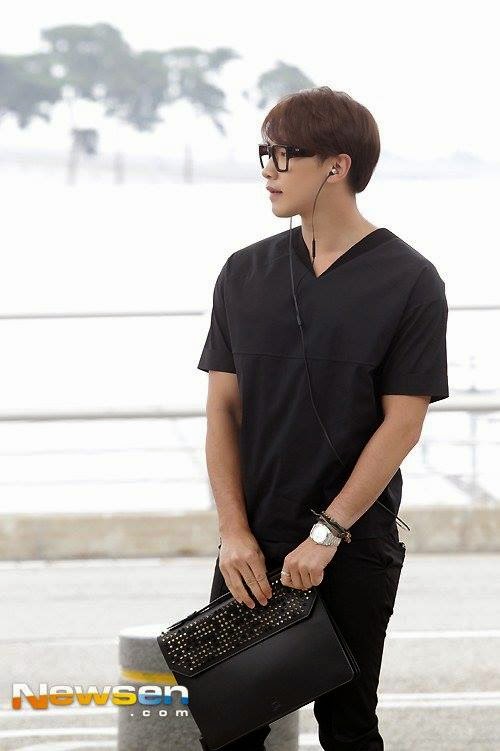 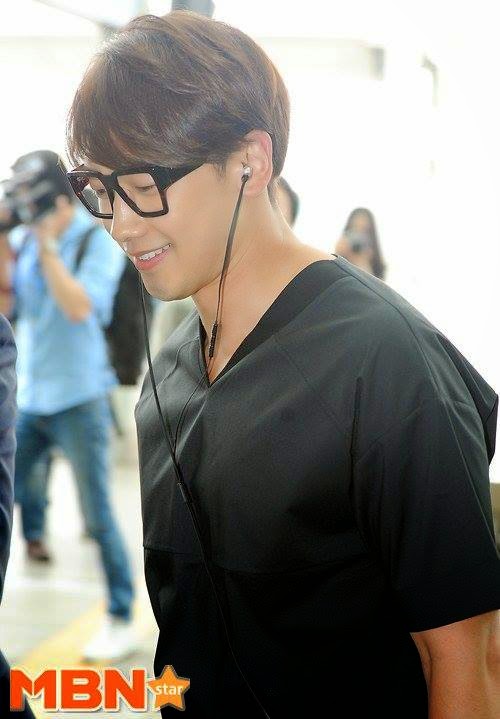 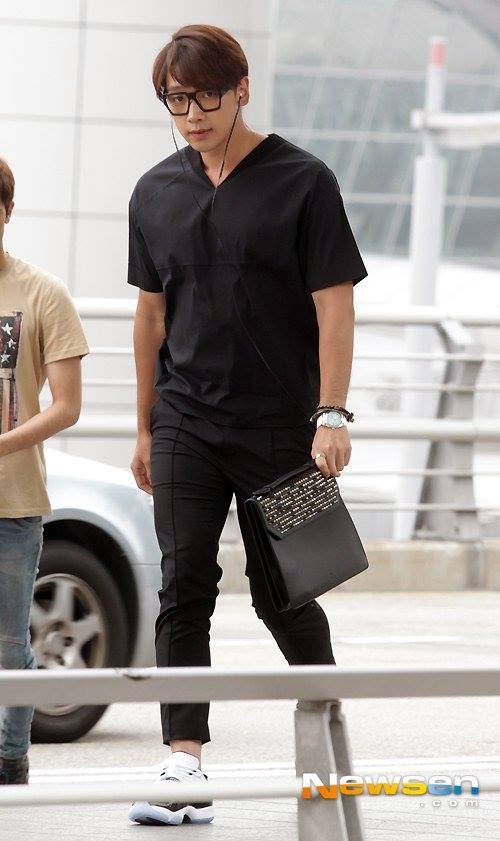 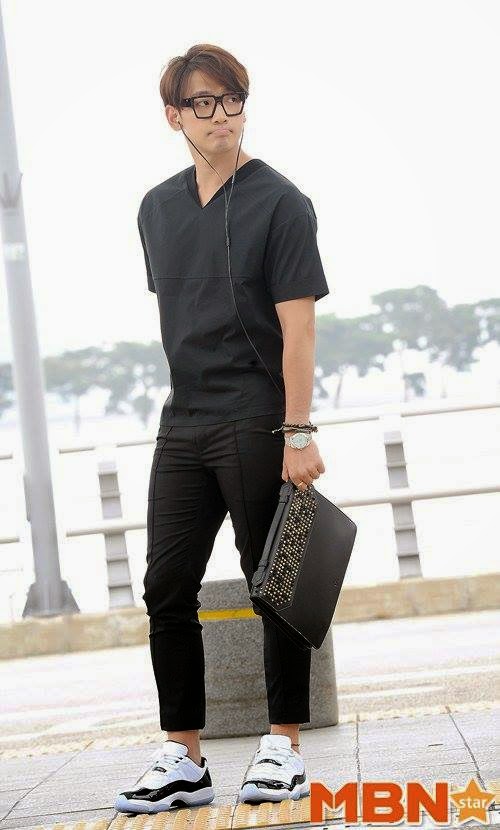 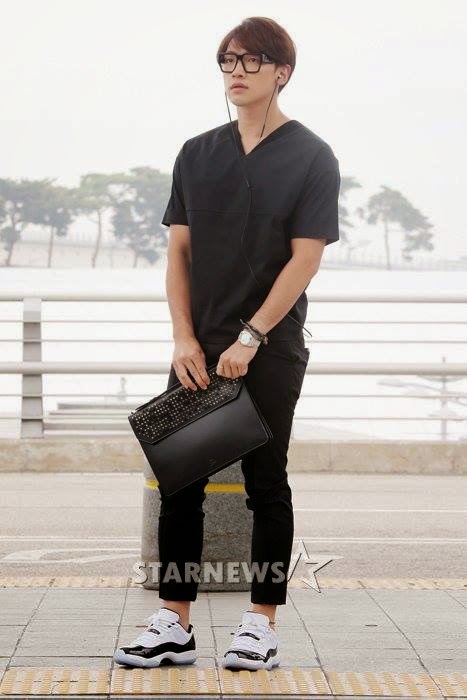 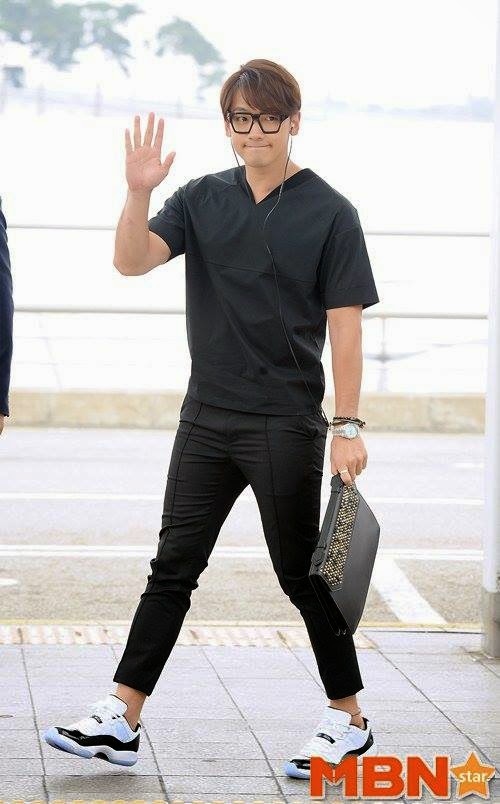 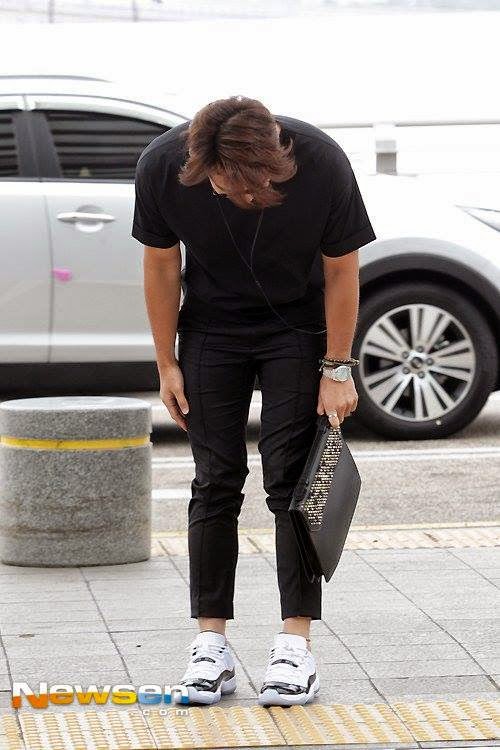 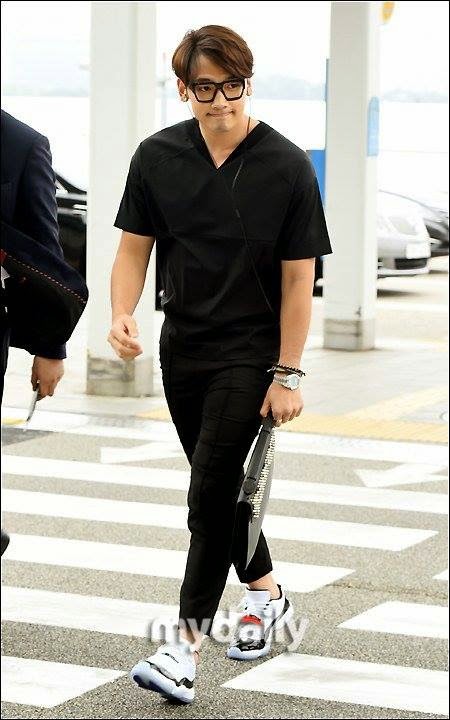 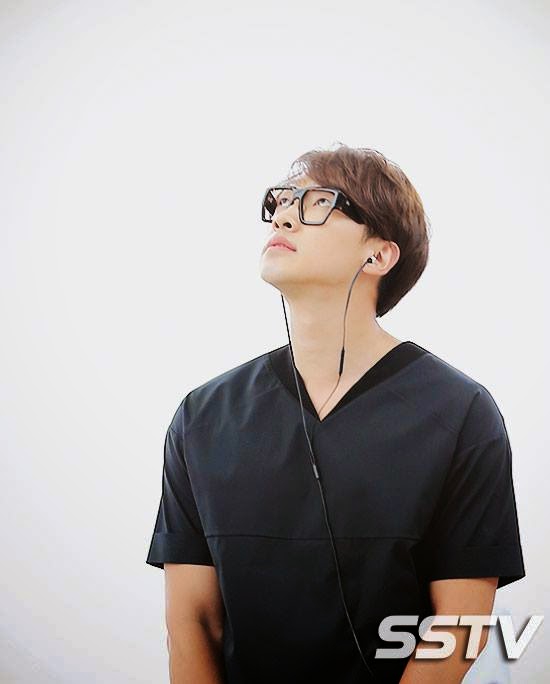 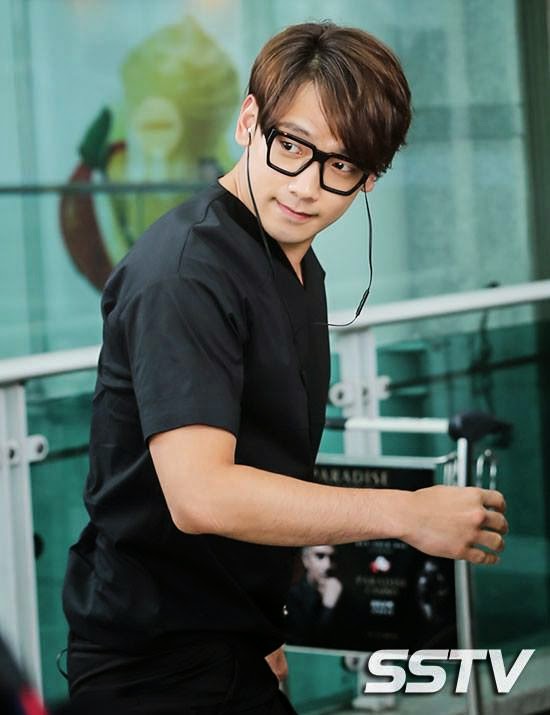 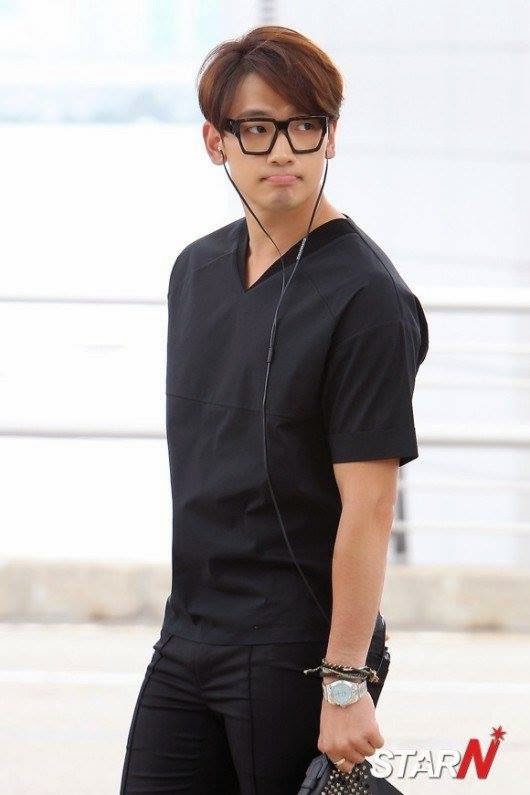 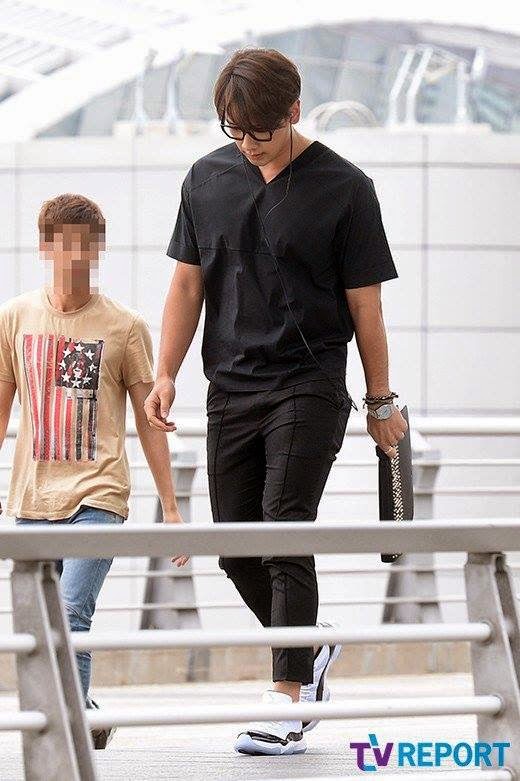 I think we all know what completed the look... It is his sweet smile...


Afterwards, we saw Rain (still fabulous in a casual attire) with fellow Korean actor Song Seung-Heon at the party organized by the influential Yue-Sai Kan, The Ambassador of International Promotion of Shanghai International Film Festival. Also present at the party was, the Jury President of The 17th SIFF, renowned actress Gong Li.

Of all the superstitions surrounding Friday the 13th, good things do happen on this day! A chock full of Rain! And yeah... lemme get on the write up of the 17th SIFF. Thanks for reading, guys... catch you later!

Following Beijing and Shanghai, Guangzhou was the third stop for the Rain Effect shows in China. Certainly it was a memorable day for fans of Rain in that city held at Guangzhou Gymnasium on May 24, 2014.

Photo and video credits: Weibo users, official photographers, as tagged and as watermarked 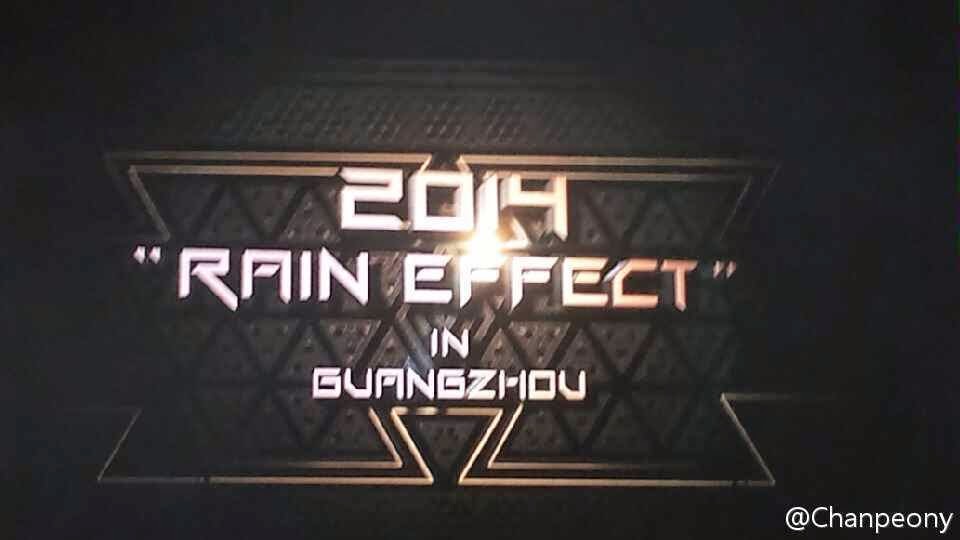 Lucky for us, @简爱kevin at Weibo posted pre-show pictures and gave us a glimpse of the stage before people filled it in.


Then, on the night of the show, Clouds filled the venue to the rafters. And holding out light sticks, they brought out vivid colors  which danced along with the lights on the stage. It's one big event, all right! 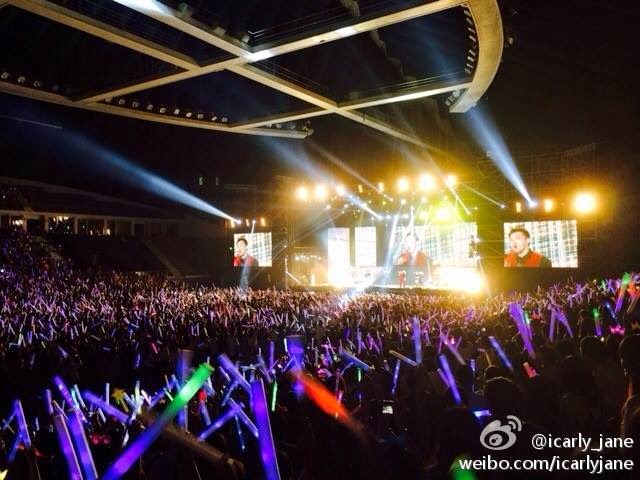 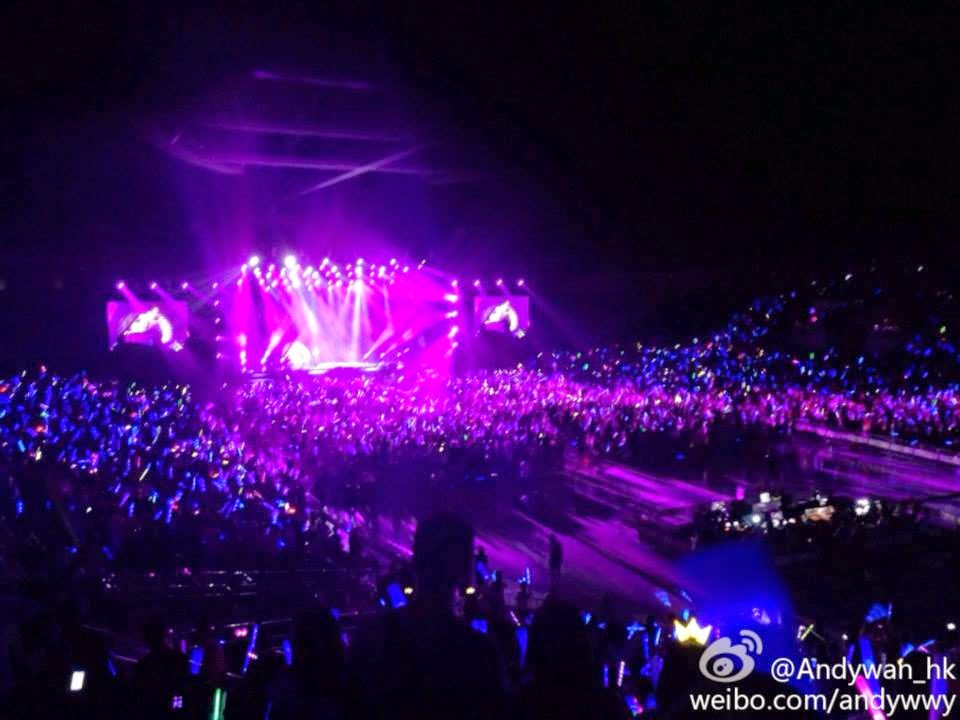 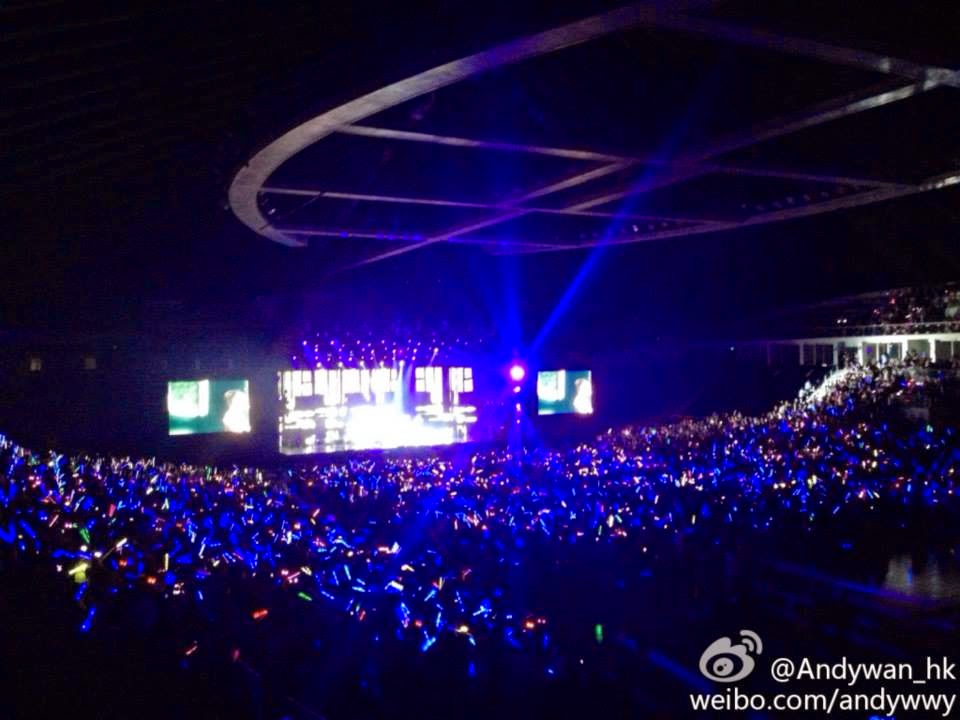 Just before Rain came on stage, a spectacular black and white illusory montage was played with the 35-second Rain Effect track. This heightened the anticipation to see Rain in the flesh on stage. As you can tell by the screams in the video below, it was certainly very effective. I know you will scream, too! (^_^)

Video below taken by Chanpeony and shared by Shirley Ri on YouTube:

Turn up the volume, turn on the lights... towards the end... keep it please don't stop the music... Party-ya-ya Baby...

Yep, Rain is right... the party has just begun!

Rain performed quite a few songs from the Rain Effect album like 30 Sexy as mentioned, La Song, Dear Mama Don’t Cry, and Marilyn Monroe. Aside from that, he also sang his all-time popular hits like You, How to Avoid the Sun, I’m Coming, It’s Raining, Touch Ya, My Girl, I Do, Hip Song, With You, Fresh Woman, Bad Boy, and Instead of Saying Goodbye.

Slick and suave moves make Rain such an eye catcher. Feast your eyes on his gorgeous body as he performs How to Avoid the Sun. Video courtesy of Superdog Spinz:

Some of my favorite moments from the show are when he performed Touch Ya. This was probably the most energetic number Rain has had for the show! The choreography of this song has always brought out the masculine energy to go with the tough rhythm...

Fan cam below by rainalu at Youku, as shared by Rain's Little Cloud on YouTube:


La Song is one of my favorite songs and his performance here was sublime. If Touch Ya was the most energetic, this one would be the most enjoyable to watch! Seeing Rain with his cutest smile and dancing to the Latino rhythm of the song is sensational! You could hear the audience singing (and most probably dancing) to the tune!

Fancam below by Sarah Ng, and shared by Rain's Little Cloud on YouTube

And the final dance routines in the finale was a good end to the entire concert. Aww come on! It was an encore of La Song and Hip Song, plus Rain and his crew danced freestyle to Kriss Kross’s Jump!

And my favorite photos of the night are…


It was such a phenomenal concert! It gave the audience the true feeling of what the Rain Effect is! For more fan cams, check out the YouTube channels of Rain’s Little Cloud and Rain’s Cloud Thailand. Thanks to the awesome audiences who brought us photos and fan cams of the Rain Effect Show in Guangzhou. I, myself, hope that I would be able to attend Rain’s concert in the future! (^_^)

Posted by Angel Mariel at 7:57 AM No comments: