Stirring Up a Storm: Rain at the 2013 Mnet Asian Music Awards

It was good news to all when it was officially announced that Rain would be performing at the 2013 Mnet Asian Music Awards. Held at Asia World Expo Arena in Hong Kong, the place was abuzz with personalities from the Korean entertainment industry. Surely, November 22, 2013 is a day K-pop fans would never forget.

Famous people graced the event. Korean pop stars and even Hollywood celebrities were there. But all Clouds tuned in for one and only one person! Rain… the man of the moment.

There were many performances throughout the night, and the raucous cheer of the fans were unending, but they were all stopped by the roar of a deluge of water coming over the speakers. Arcing tendrils of electricity filled the big screen on the stage. It was clear to all that a storm was coming! And as the fireworks bloomed and spread their fiery petals, there stood Rain…

He looked seductively at the audience and smiled. Rain then put on his sunglasses as if silently saying, “It’s Showtime!”.

Then the slow harmonic melody of “How to Avoid the Sun” filled the whole arena with music! And Rain serenaded the audience with his sweet voice.

The slow song was replaced by futuristic intro to the tune of It’s Raining! It is Rain-ing again! Notice how the background rains with the words "It's Raining". Awesome!

But the grandest of it all is Hip Song. With a surprising take of a grand and fiery re-entrance, Rain and his dancers came back via a lifting stage.

We see our man enjoying the stage and being in his best self. We see a happy Rain once more.

Here are photos of him and his dancers. See, his dancers own the stage too. Talk about great synergy!


But Rain revealed one of his most beautiful visual effects towards the end. What I love was the shower of water on the stage with Rain reigning on top. As if he makes it rain! Oh yeah!

Okay so enough with the photos, Here is his performance. Video courtesy of Mnet on YouTube. Take a deep breath and get ready to scream and make some noise!

And when you thought that Rain would only put out a great performance, he further surprised the audience with a video of his lifetime achievements, chronicling his journey from his debut all the way to the present.

Afterwards, a short preview of his upcoming activities was also shown. Now this, is the biggest gift from the Master of Surprises!

We are all looking forward to his new show in December. Gasp! That’s next month!


And he will be releasing a new album! So many overwhelming treats from our man! He just takes our breath away. Save the date: Rain Falls Again on January 6, 2014!

His previous appearances and performances this year: Sonic Bang Festival, MENtholatum Press Conference, Super Boy, FIDe Fashion Weeks, To You -Rain and The Cloud 8th Fan Meeting, The 千游子 Yunnan’s First Most Influential Awards, The Bazaar Men Style Awards and the ongoing Story of Rain Zepp Tour are all unique! And now, Rain tops it all off with his 2013 MAMA stage! Wonderful!

Our man surely knows the Latin saying Amat Victoria Curam (Victory Loves Preparation). He just showed it to us on the stage of the 2013 MAMAs.  His absence from July 10, 2013, and only popping out once in a while was all to prepare! And in the end, he emerged victorious!

And it's not just any performance! Take it from the MAMA Official Facebook Page: it will be an epic special showcase performance! Yeah! Our man surely knows how to give surprises at a grand level! Just a few days ago, we were turning our heads to his Zepp Tour, now he has our attention once more! 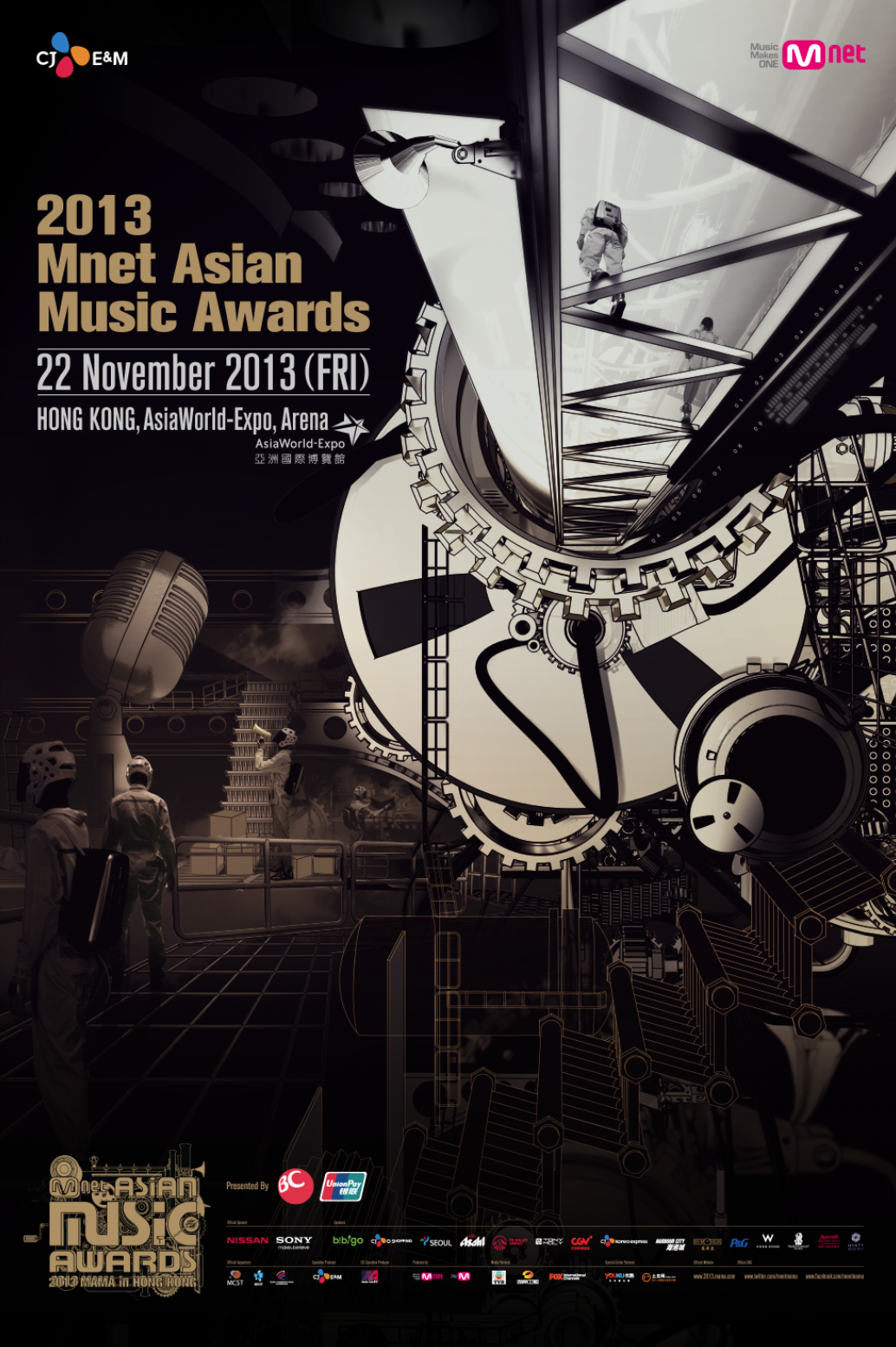 Mnet Asian Music Awards (MAMA) will be held at the Hong Kong Asia World-Expo Arena tomorrow night (November 22, 2013)! It will start at 7:00 PM Hong Kong time, which is of the same time here in the Philippines.

You can watch it at channel Mnet on cable . MYX Philippines will also have live coverage of the event, read more at http://www.myxph.com/features/6970/2013-mnet-asian-music-awards----bukas-na-mamaonmyx/

So go home early tomorrow and tune in for the 2013 MAMA! It will RAIN on your TV screens!

Posted by Angel Mariel at 4:40 AM No comments:

Rain at the Bazaar Men Style People of the Year Awards

Bazaar Men Style People of the Year Awards wouldn't be complete without Rain. Our man has been known to have a good fashion style. His airport photos alone are enough proof of that! This event, organized by fashion magazine Harper's Bazaar and sponsored by Mercedes Benz, was held at 789 Art Zone on November 2, 2013.

Here are some photos of the venue that our Cloud sisters in China took for us. Credits as tagged.


Night came and we see those photos fill up with brilliant lights and famous celebrities! Our hero stole the scene again. Wearing a formal suit, he graced the red carpet in all his awesomeness!


Now let's take a look at the interior. The stage is wide enough and it seems that it was designed to enable audience interaction.


During the event, Rain was awarded the 2013 Asian Entertainer Award. Just before his appearance on the stage, there was a short montage of photos that showed him at various stages in his career. It was done very beautifully and it showed his growth from a young man to the hunk that he is today.

Handsome, successful, yet humble are the words that can be used to perfectly describe Rain. Look at our idol getting the trophy on stage and giving a speech which seemed like it was his first time receiving an award. Just simply admirable!


Here is a short clip of him giving his speech and we are so happy to hear him speak English, too! The Chinese words he said was 现在我很高兴. 我爱你们. 谢谢 China, 谢谢大家, 谢谢MCM. 我爱你们!” ("I’m really happy now. I love you all. Thank you China. Thank you everybody, Thank you MCM. I love you all!")

Video shared by ratoka201223 on YouTube, courtesy of LeTV:


As part of his invitation to the event, Rain also did a short performance and what a stage it was! Rain gave us the best performance of the year! LOL! I don't know.... it is still to early to tell. With his upcoming Zepp Tour this week, who knows what surprises he has in store. But for the moment he gave his best yet! Take note, he swapped the formal suit with some casual clothes for this! The abstract print on his shirt is amazing!


When he finally appeared, he owned the stage with his striking dance moves in ‘Hip Song’ and soulful voice in ‘I Do’. There was flawless dance routine transition and it was in perfect timing with his dancers. Bravo! I really adore putting his sweet voice on repeat and listening to it.

I'm glad to see him enjoying the stage, smiling, and just charming his audiences away. It's been so long since I saw that kind of performance... to see a happy Rain. So here he is, singing Hip Song and I Do for the night.  Enjoy, listen well, and you will see why the host said after the performance "我爱 Rain" (I love Rain!).

Video shared by ratoka201223 on YouTube, courtesy of LeTV:

Of course there are awesome stills that captured the spur of the moment excitement brought by Rain on stage!

And my favorite photos of the night showcase Rain's cutest smile and expressive eyes...

Bravo! Rain's appearance at the Bazaar Men Style People of the Year Award Ceremony really just goes to show how wide his appeal is and how popular he is around the world. Here’s to hoping that his next performance will be bigger and better! I’m sure I can speak for everybody when I scream  “我爱 Rain!"

Posted by Angel Mariel at 4:59 AM No comments: